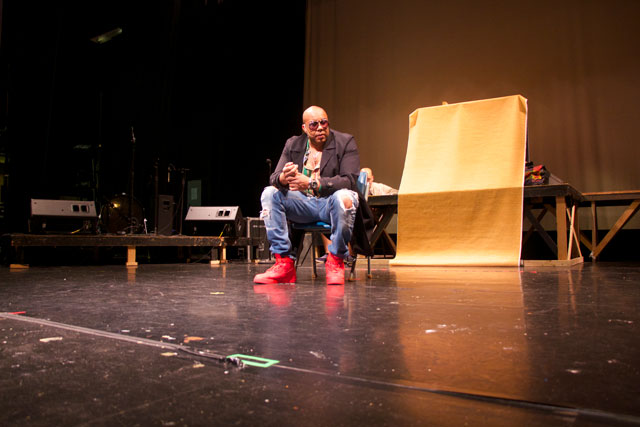 Rappers trying their hand in acting is nothing new these days. However, out of the scores of wordsmiths who traded in their rhyme books for scripts only a hand full have done so without their performances being cringe worthy.  It’s one thing to rock a stage with the audience rapping along word for word then it is to assume a role of a character.  This coming week, Philly’s own Dice Raw will try his hand at this feat.

In case you haven’t been keeping up with the Philly hip-hop scene, since the 90’s Dice Raw has been consistently been cranking out some of the best hip hip as a solo artist as well as with the legendary Roots Crew. If his affiliation with The Roots rings bells it’s because Dice has been literally all over their projects. So much so many believe he’s a full blown member. “A lot of people know me from the work I’ve done with The Roots.  I’ve written a ton of songs with them and have a long lasting friendship and work relationship.  I love those guys,” Dice explains.

Having already conquered what he set out to do in the music arena, Dice is poised to try out his acting chops in an edgy new hip hop play entitled “The Last Jimmy.”  Influenced by his last album “Jimmy’s Back” and partly by author Michelle Alexander’s book “The New Jim Crow,” The Last Jimmy looks to manifest Dice’s social consciousness on stage. As Mr. Raw puts it, “The piece takes place in the courtroom setting with basically Jimmy, which is me the character that is basically defining a few generations of the last years of Jim Crow.  All of the characters are black, which is giving you different shades of blackness and different sides on what it is to be or experience the black experience in America. I am on trial for basically my life and [fighting] their unjust laws that basically appears in the mind of fear that black makes do and not the actual crimes they commit, because the fear of what we are going to do is bigger than what we’re actually doing in the streets.”

In a world where many people in Dice’s position play it safe, he’s always been one of the few established artists from Philly who bring social injustice to the forefront.  While many rappers look to rise to fame with talk of gun-play and slinging drugs, Dice has always tried to mold the mind of listeners and paint pictures of inequalities that exist in urban communities.  His refusal to change his musical content may have impeded his reach to the mainstream demographic but Dice wouldn’t have it any other way.   When asked if he feels overlooked in the hip hop community he quickly responds, “I do a different thing. Do I feel like I don’t get the credit I deserve? Maybe, but the kind of stuff that I do I am kind of like an old Jazz singer.  You know what I am saying? They’re going to make a movie about it when I die, like Bird (Charlie Parker).  I look at myself like one of those guys.  I do it for the love.  I don’t do it for the accolades.”

This philosophy of doing what he feels is right regardless of what’s hot mainstream, will be on display this week at The Freedom Theatre (1346 N. Broad St.) Oct. 24th & 25th in The Last Jimmy, which he is credited with writing all of the musical content for. Having the play run at The Freedom Theatre is a perfect for the production team as a whole.  The theatre itself provides ballet, dance theater, as well as vocal training for young African American youth aspiring to excel in the arts.

As Dice himself is set to sing, rap, and act his way through what’s sure to be an thoroughly entertaining play, he is aware that many pressing social and political issues still loom for many of the youth in the city he calls home. Although problems such as violence, economic disparity, and drugs plague Philadelphia, Dice has always had an agenda to improve the education system.  Better education for the youth can actually solve the aforementioned issues. Dice passionately chimed in on this subject stating, “I am very big on education being that I did drop out of school at a young age and trying to navigate through life and maneuver and just try to operate and feed my family, it’s not easy without an education.  So I put that on the forefront of everything I do.  What’s going on here in Philadelphia, it’s basically I think a tragedy, but it’s a tragedy on all ends. If parents are not going to take an active role in their kid’s education, then that’s the first fight that we have to fight. We got to fight that in our households before we take that fight to the mayor’s office or councilman or congressman.  You can get in their ass but sometimes you got to get in your own ass  and make sure your kids are doing their homework and checking it.”  While most people squarely put the blame on the school district and political figures, Dice has obviously challenged parents to get more involved and not look at schools as daycare but rather a hub for the community to work together.  As Dice discussed this topic he cited a recent school oriented event that took place where very few parents attended. “They had an event here in Philadelphia and the superintendent actually showed up with the radio station and there were only like 35 parents there. To me that shows a lack of interest.  So how can you complain if you’re not fighting that first fight?”

It almost seems as if social issues have been acting at a detraction for the community rather than a magnet. This is precisely why Dice does what he does.  The Last Jimmy will be Dice’s opportunity bring together his existing music fans with fans of theater and create a unified atmosphere. As he prepares for this upcoming play, Dice hopes that he can become a bridge between the community and and the issues at hand.  Therefore, his performances whether it be on a theater stage or in a concert, aren’t just done to garner standing ovations, but to open the audience’s minds and experience life through his eyes.