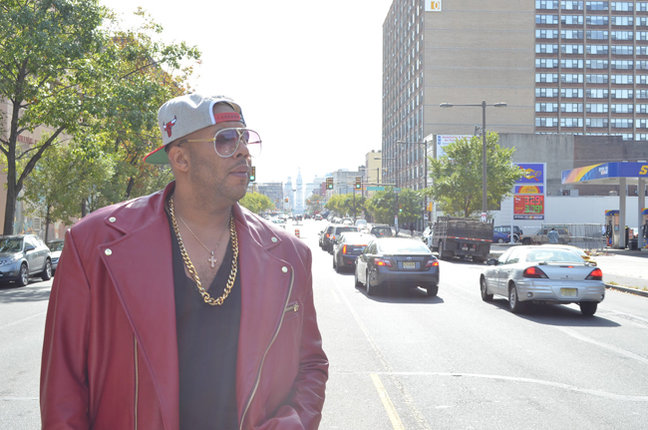 A crisply-casual Ozzie Jones saunters onto the Freedom Theatre’s John Allen Jr. stage from its right, playfully doing gym-quality squats to show his laughing stagehand pals how much his ailing back has improved. It’s of the rare moments of humor amid the very-serious business the veteran director and his mix of specially-selected pros are deeply engaged in and preparing for: dramatizing the stark, gripping verses of Karl “Dice Raw” Jenkins’ late 2013 album Jimmie’s Back, an LP inspired by legal scholar Michelle Alexander’s revelatory book, The New Jim Crow: Mass Incarceration in the Age of Colorblindness.

First presented at a “Sittin’ In” session at the Kimmel Center back at the start of the year, The Last Jimmy has morphed over the spring and summer from a pitch-black hip-hop satire into a pitch-black hip-hop musical set in a courtroom, interspersed with Dice’s hypnotic verses, bold, haunting dialogue by noted writer Phillip S. Brown and the skilled fervor of Rennie Harris’ sure-fire choreographic touches. It’s a passion project driven by The Roots collaborator’s urgent need to stem the tide of mass black-male jailings and help raise a flag to alert those on the outside that even more troubled times lie ahead should his and others warnings so unheeded. For two days this week, they’ll be sounding the alarm in North Philadelphia.

PW hung out with Dice after an evening rehearsal to get details.

PW: I know that your Jimmy’s Back LP was inspired by Michelle Alexander’s The New Jim Crow. Can you share your evolution from reading that book into conceptualizing your record, then creating this production?

DICE RAW: A friend of mine, Tayyib Smith, was like, ‘Yo, man, you have to read this book.” This was in 2011. He was like, ‘You got to read this book,’ and I was like, “Ahh … all right, man. Give me the book.” So, he gave it to me, and he was like “Did you read it yet?”—and this was like a day later. He called me a week later, and he just kept calling me, like ‘Yo, I am serious. You need to read this book.” So, one day I bought the audiobook and listened to it on the train ride on my way to New York, and I was just blown away by it. I was shaken up about it. So, I immediately [thought] the only thing I can do to offer my assistance is to do kind of what she did, which was write a book. Since I make rap songs, I want to do an album that outlines what is going on with reentry, the young people getting locked up at such an alarming rate, the stop-and-frisk scenarios and the rapes that are actually going on in the prison system. All the statistics were coming at me so strong, and then I started noticing that it was coming from different places, too.

Are there any stage plays or productions that you looked to as examples of what you wanted to create on stage with The Last Jimmy, or captured what you wanted your audiences to walk away with emotionally?

Definitely Mike Tyson’s one-man show. For me, that is kind of what embodied exactly what I was kind of thinking. It really gave a stripped-down, penetrating way to look at theater, so I was like I’m going to do it just like Mike did it. I wanted [mine] to be a one-man show, but I was like Is there going to be instruments or is there not going to be instruments? Then Lets get some musicians. You know what? Lets make it sound like a courtroom. So it just got bigger and bigger—and then we added dance to it. It just grew and grew conceptually. I’m looking forward to seeing it, too, just like everybody else.

Who were you building with? What did your team look like, and how did you present the idea to Ozzie [Jones, its director]?

Ozzie was in the thing we did at the Kimmel. He played the judge. We did a few rehearsals because the Kimmel only gave me a month notice. We went in a couple times, and it kind of just came together. The musicians were very good—Mosaic Flow, who I used. I used Dominique Superstar, who has been a long time singer/songwriter locally here in Philadelphia. He used to live in L.A., and he was an actor; he had been on TV. So I just kept the same people I had been working with from the beginning. Ozzie loved it so much, plus, one of Ozzie’s passions—as well as mine—is being focused on our communities, educating young black males and keeping them out of prison and trying to do anything that we can do to use our art and creative voice to try and steer people in a different direction.

And the fact that he is a veteran producer and one of the shining stars of Philadelphia stage can’t hurt, right?

No. He knows theater, definitely. He kicked our butts.

What do you hope the audience gets from the play that might be different from what they get from your record?

The main thing I want people to get from the play—and the album—is a call to action and to wake up anyone who doesn’t know what is going on about mass incarcerations, privatized prisons or how hard it is for these street experts to get reentry into society. You know the way that it is with these small laws—the marijuana or even cocaine laws or handgun laws, when he basically lives in a war zone. These are the necessities that you use to survive, so if you are put in a position where you have to fight and you have to live a certain way, then you live that way and you get arrested for it, then you [come to realize] it was a mistake, and you want to function as a full member of society, it is harder for you to do that now. Eight million fellas lost the right to vote just a couple weeks ago. That’s what I want people to take away from it. I want them to take away a sense of urgency to do something when they get home, even if it is to sign a petition—which we are going to have via the Lighter Sentencing Act. I want to educate them on the election that is coming up the week after the show. That is basically all I want to do because that’s how I was, listening to the audiobook. I felt like I had to do something. There was a sense of urgency.

Do you feel like the black community has a certain kind of detachment around mass incarceration as an issue?

Oh, yeah. Definitely. That comes from people being just being desensitized to the seriousness of what incarceration represents. I heard a kid say, ‘Yo, I’m going to jail, but it is nothing. Every gangsta must bid, so if I’m really a G, I have to go to jail because it is a rite of passage.’

What tired rhyme did he get that nonsense from?

That was his own imagination. I think hip-hop’s problem is that a lot of these rappers make light of incarceration, of being locked up, and they have never been locked up. They make light of selling drugs or selling handguns or living a certain kind of life they have only seen in the movies. But when it is projected, and you are using that, saying This is why I’m successful, when children see that, they look on TV and think Damn, that is the key to success. If I’m looking to be like that rapper, forget my creativity, forget learning anything about music—I need to learn how to sell coke. Also, there’s this whole seriousness that has been taken out of jail. I heard a guy warn someone, like ‘Yo, you are going to jail, and you are going to get raped,’ and the other dude’s like, ‘No, man. I’m not going to get raped. All the gay sex that happens in prisons now is consensual.’ That is what he told me. The fact that somebody made light of it—they were like, ‘I’m not worried about that. That don’t happen no more, I’ll be fine.’

Is it possible that black folks’ desensitization stems from the fact they tend to also be the victims of those crimes for which many so many are being jailed? Would our community’s attitude be different if those filling prisons weren’t going there mostly for victimizing the very ones from whom they seek compassion?

Basically, a crime usually happens like 50 feet or 200 feet away from where you live. So if we started doing crimes [further] away from where we live, or started robbing those people at the same kind of alarming rate, yeah, it would be real different—and they’d be cracking down on people way harder.

Black people need to just make it important to try and get our kids the right education that they need. That’s where everything starts. I don’t think we take our education seriously, and being an 8th grade dropout, I know for a fact that we don’t take our education seriously. I didn’t take mine seriously, and I pay for it every day. I don’t necessarily pay for it financially, but [I do] when I go to business meetings or I go talk to different people in different forums who may have gone to Princeton, Harvard or wherever. Some things are a learning experience for me, where they are practicing what they learned and then mastered over the years.